David Dye is a resident of Philadelphia, where he lives with his wife, a newspaper columnist, and their two children.

David launched his broadcasting career as host of a progressive music show on WMMR 93.3FM, a pioneering progressive rock station here in Philadelphia. During his four-year tenure, David won accolades for his taste and laid back presentation. After a five-year stint programming radio stations in Maine, he returned to Philadelphia where he gained public radio experience at WHYY before being recruited in 1981 by alternative rock station WIOQ 102.1 FM where he made his mark on the music scene for nearly a decade.

In 1989, Dye took his musical quest to WXPN where he hosted Sleepy Hollow. Two years later, David was asked to spearhead research on the viability of a new public radio program. The research revealed an audience need for a new kind of musical format - one that was intelligent, diverse and would give musical guests a showcase for their artistic expression. Based on the findings, David went to work to create a unique program of musical discovery where listeners would be introduced to an eclectic blend of contemporary sounds from legendary and up-and-coming artists. World Cafe was born. 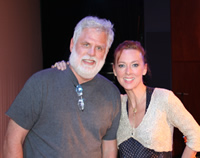 Since launching World Cafe in 1991, David has served as its host of this nationally acclaimed show, which is now syndicated on more than 250 public radio stations across the U.S. Every week, Dye brings out the best in interviews with internationally known artists such as Yo-Yo Ma and Joni Mitchell. On March 31, 2017, after 25 years as the Host of the World Cafe, David passed the mic to Talia Schlanger to take over the show. David still remains on as a contributing host from time to time.