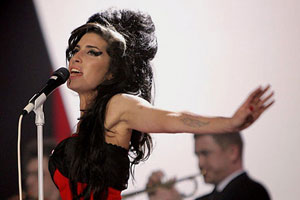 Amy Winehouse has exploded onto the UK pop scene as a retro-inspired, yet fiercely liberated, very modern soul singer. Her joyful clash of pop jazz stylings with brash hip-hop attitude and powerful vocals has turned more than just heads.

She's quickly establishing herself as a bona fide star overseas, even though she's barely out of her teens. Her rugged image, at times a rowdy homage in fashion as well as demeanor to vintage bad girl icons such as Ronnie Spector, separates her from the ho-hum homogenous pack of 00s divas in training.

Amy was born in North London and grew up on an eclectic diet of popular music, from hip-hop to pop to adult R&B, and was singing about as soon as she could talk. She began playing the guitar at age 13, growing into her talent for creating her own material. Her rebellious spirit also kept her from being strictly attuned to the standards. Her infectious sound derives equally from incorporating the flavor of childhood hip-hop favorites Salt 'n' Pepa and TLC. After a few years of singing professionally, she recorded 2003's Frank, an impressive debut, having peaked at #13 on the Billboard UK Charts. 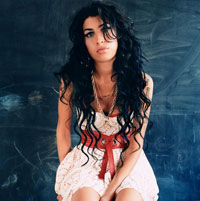 Critics and fans alike rave about her voice, drawing comparisons to Sarah Vaughan, one of her biggest lifelong influences, as well as Macy Gray and Lauryn Hill. But the attention hasn't stopped there. Amy is hailed as vibrant and lively, bringing a real voice of human emotion to her lyrics in a genre that has long been focused on the singing alone. Amy co-wrote all of the original songs on her debut, and continued to hone her writing gifts in the process of crafting her second album, determined to not just be the face, but also the mind behind the music. Her media persona too demonstrates she's no pop tart eager to please her handlers. In 2006, her management company suggested she rein in her party girl exploits. Instead, she arrogantly split from her management and got the last laugh as she channeled the fallout into catchy hit "Rehab."

In October 2006 she released her follow up album, Back to Black, and any doubts about her longevity were dispelled. The album went hit #1 on the UK charts and crossed over internationally, reaching #7 on the US charts. The momentum is still building, and Amy is poised to make a big splash in the states - all before her 24th birthday.

Rehab | You Know I'm No Good

More in this category: « Ryan Shaw: WXPN's May 2007 Artist to Watch Dr. Dog: WXPN's March 2007 Artist to Watch »
back to top
Site Map | Help & FAQs | Privacy | Contact | Playlist | Public Inspection File | Public File Help
Copyright 2021 WXPN-FM / The Trustees of The University of Pennsylvania, All Rights Reserved
XPN.org is made possible with the generous support of XPN Members and our Business Sponsors.