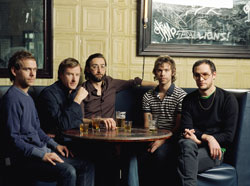 The National is a band of New Yorkers transplanted from Cincinnati, Ohio: Matt Berninger, Aaron Dessner, Bryce Dessner, Bryan Devendorf, and Scott Devendorf. What each member of the band does is not that important, but what they do together seems increasingly more so.

When last we heard from The National, they'd released and toured behind their Beggars Banquet debut, Alligator, an album whose reception closely mirrored the kind of sounds they made on record - it started out quiet, and ended up very, very loud. Alligator became one of the most widely discussed and critically acclaimed independent albums of 2005 - "album of the year" to one Los Angeles Times critic. It also earned top marks in a poll of America's bloggeratti and rapturous reviews throughout the U.S. and Europe. (Uncut, selecting it as an album of the month, called the record "their first masterpiece.") More importantly, The National became an object of growing obsession among a thriving community of fans - strands of their lyrics decorated MySpaces; during shows, audience members sang along in unison, echoing through concert halls; news of celebrity admirers like Bruce Springsteen shot across the interwebs. The National became famous in an alternate universe - one where the gossip rags talk about the people you actually care about. 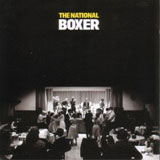 Gothic in its detailing but jaunty in its execution, Boxer is something far richer than orch-pop (translation: rock 'n' roll topped with violins). Rather, the band find ways to combine the expressive depth of composed music with the urgency of pop. It's a sound built with guitar, bass, piano and drums and festooned with brass, woodwinds, backing vocals, strings, and organs. A product of dedicated labor, happenstance, and alchemical reactions, the music reveals new layers with each successive listen.

There are nods toward a host of iconic Americans - F. Scott Fitzgerald, Raymond Carver, composer Steve Reich, Bob Dylan and the Band, Jonathan Ames (especially "Wake Up, Sir!"), even a bit of Grateful Dead. There are sketchy suggestions of Leonard Cohen, Grace Paley, Nick Cave, John Ashbery, The Smiths and Tom Waits. But The National's pedigree is becoming harder and harder to trace. They may remind you of distinguished ancestors but, now, The National sound like no one so much as themselves: a meditative rumble that starts in the heart, gets caught in the brain, and resonates outward.

Related Links
Listen to an archived concert from the 930 Club in D.C.