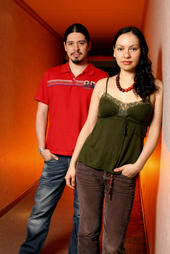 Meet Rodrigo Sanchez and Gabriela Quintero. They play flamenco guitar and are influenced as much by Metallica and Led Zep (which they cover on their debut) as they are influenced by Al DiMeola and Strunz & Farah. Their self-titled debut in the States is on ATO Records, and was produced by John Leckie.

Related Links
They recently stopped by the World Cafe with David Dye, and you can catch their performance and interview here.

Originally from Mexico, they are now based in Dublin. The duo met as teenage metalheads in Mexico, and played in a band together, then drifted to Europe, and finally to Dublin as they were developing their acoustic sound.

"We've been playing the album, however when they came in to record for the World Cafe show, and we saw them live they blew our minds."
- Bruce Warren, Assistant General Manager for Programming, WXPN