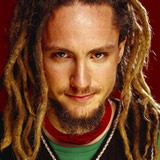 The John Butler Trio effortlessly combines gritty soulful vocals, elements of hip-hop, and Appalachian folk with subtle hints of everything from reggae to Zeppelin.

As a multi-talented musician, John plays a variety of instruments, including numerous 12-strings, lapsteel guitars, and banjos, with dexterity on par with some of the all-time greats. Alongside Butler, joining the trio are powerhouse drummer Michael Barker and upright bassist Shannon Birchall.
Related Links
Visit our CD store

JBT's What You Want EP was the band's initial introduction to the U.S. The EP will be followed by a full-length album scheduled for the spring 2005. In the meantime, fans can whet their appetite with What You Want, which contains a total of six songs, three of which are previously unreleased. The unreleased material includes the funk-a-fied, uptempo track "Something's Gotta Give," an acoustic version of "Treat Yo Mama," and an introspective, heartfelt version of the Lennon/McCartney classic "Across The Universe."

In their native Australia, the John Butler Trio has established themselves as one of the most successful independent artists in recent history. JBT are commercial superstars as well as critic favorites in addition to being the country's number-two top touring act.

The band's most recent Australian album release Sunrise Over Sea debuted at number one, marking the highest position ever achieved by an independently released artist. The disc was certified platinum after two weeks and went double-platinum in 10 weeks. It remains at the number two spot on the Aria Charts after 16 weeks. In addition, JBT received the highest honor at this year's APRA awards (Australia's version of the ASCAP/BMI awards), winning the highly coveted Song Of The Year award for their song "Zebra," beating out Jet's "Are You Going To Be My Girl?"

This is the first time in history that the award was given to a self-published, independent singer-songwriter.

This album covers a whole lot of stylistic ground - have you always listened to and appreciated a wide variety of music?
Yeah, from Soundgarden, Tool, Janes Addiction to Beastie Boys, De La Soul, The Meters, The Police to Gillian Welch, traditional Celtic and Indian music, bluegrass, blues and jazz. I just like anything with soul and truth. Music that makes you feel, think and get the chills.

What was the first rock album that really made your hair stand on end, that made you want to be a singer and player yourself?
I kinda stumbled into the performing thing but I think one of the first was a song called "The Loneliness of the Long Distance Runner" by Iron Maiden. Also the song "Jeremy" live at the Grammys by Pearl Jam. That was bad ass, truly a moment in time.

What is your favorite Australian TV show?
"Kath and Kim". I'm not sure if you'd get the Aussie humor, but it's funny stuff.

What have your crowds been like so far here in America? Has it been a "jam band" crowd or something else?
All types really, from 13 to 56, that's the way I like it. No specific demographic. It's music for all ages, all races, everybody. It's more exciting and real that way. But I'll say this there's nothing worse than a drunken frat crowd, yucky.

You were actually born here in America, then returned to your father's native Australia when you were 9-years-old. Was that a traumatic experience, or did you fit right in?
Definitely did not fit right in, and, yes, it was a huge culture shock but also the best thing that ever happened to me. Sometimes it was very traumatic, but lots of very deep emotional moments shaped my life, probably like most people's life.

A lot of your lyrics seem to deal with a "do unto others" type, karmic vibe. Is that a basic life goal for you personally?
Yeah, definitely, and a big emphasis on the word "goal", it's an everyday effort to find compassion and not judge others and most importantly one self.

What do you think about American radio (we already know you love WXPN, thanks...)? How does it compare to Australian radio?
Well I think Triple A is great. Could you imagine how much good music would get to the masses if commercial radio was as daring? Think I said it all there.

Finally - are you personally a fan of "vegemite?" If so, could you explain why, please?
I wasn't for years. But my little girl Banjo loves it, and when she was young she was always leaving bits of 'veg' on toast all around the house. In my delirious, sleep deprived, early parenting phase I started picking up her leftovers and eating them. I slowly came around. Its amazing what you'll start liking when you're too tired to cook for yourself.