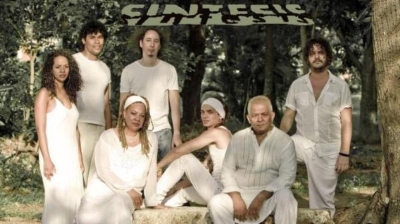 In this 19th installment of World Cafe's Latin Roots series, Carlos Alfonso, one of the vocalists and principle songwriters of the Cuban progressive rock band Síntesis, talks with host David Dye about the relationships between Cuban music, Yoruba music (Yoruba are a people in current-day Nigeria) and Arara music (Arara being a culture in present-day Benin).

Síntesis is cited as Cuba's first progressive rock band. The band's influences include groups such as Genesis, Pink Floyd and Yes, as well as Cuban trova, which makes for an interesting mix. The group's line-up has evolved throughout their 37-year musical career. The new incarnation of Síntesis features a blend of progressive rock combined with Afro-Cuban Santeria ritual music and jazz fusion. Listen to "Canto a Ebbioso" by Lázaro Ros and "Asoyín" by Síntesis.