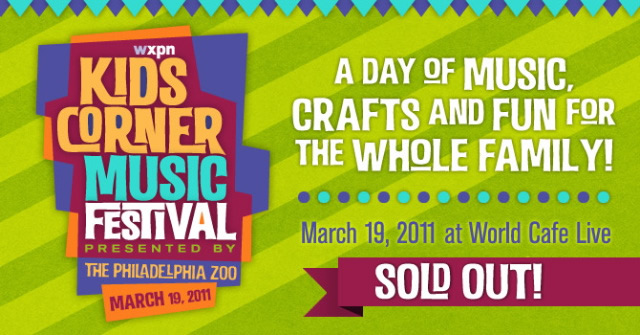 After over two decades of celebrating the best and brightest in the family music genre, Kids Corner has its own festival!

Join us Saturday, March 19 at World Cafe Live, when we showcase some of the newest sounds on Kids Corner! Mixed with an afternoon of live music will be two floors of make-and-take crafts, light entertainment and even a family-friendly lunch buffet! 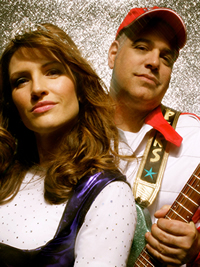 Don't let the name fool you - this Manhattan-based musical duo (and married couple) stirs up some seriously rockin' music, ranging from alt-pop to country to reggae, triggering memories of artists as diverse as Natalie Merchant or The B-52s - all with a positive message! Spontaneity and surprise are key to Princess Katie & Racer Steve’s shows. You never know what they’ll dream up. Princess Katie (aka Katie O’Sullivan) says, "I just can’t seem to do a show unless it’s special for the kids!" Princess Katie & Racer Steve might throw out inflatable soccer balls or surprise the kids with a confetti or Mylar steamer launch. Sometimes they’ll hand out mini racing flags so kids can wave them every time they hear, "Go, Go, Go" in a song about Racer Steve’s car racing. They’ll wear "funk hats" and sunglasses for their "Hey Claire" funk song, and for "Sneakers," Katie has GIANT sneakers to wear under her princess dress. Says Racer Steve (aka Steve Borne), "We’re really working toward entertaining kids on every level, not only through the music, but also by making them laugh. Behind everything we create, there’s an element of humor, and we’re so happy to see that the kids, get it and laugh along with us." 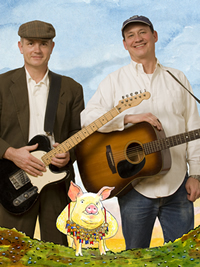 Key Wilde & Mr. Clarke began writing and performing together in 1990 and formed the duo Reak and Stump. They shared an enthusiasm for Punk, Bluegrass, Old Time String Bands, Mills Brothers, obscure folk tunes, Hank Williams Beatles, and Dylan - not necessarily in that order. Clarke, who still holds a British passport and has never learned to speak with a proper American accent, grew up in England and France. His early bands (Boring Sponge, The Undead) were prominent in the 80's Long Island punk/hardcore scene. Wilde grew up in Texas and North Carolina and started out playing Bluegrass (The Rank Strangers, The Dreadful Snakes). One of their first performances together as an acoustic duo was described in the New York press as "Syd Barrett meets Hank Williams". In a good way. Together Key Wilde and Mr Clarke are now committed to combining outstanding visuals with funny upbeat original songs that will appeal to people of all ages. Songs and pictures - with an emphasis on HUMOR and memorable characters - that parents and children can enjoy together. 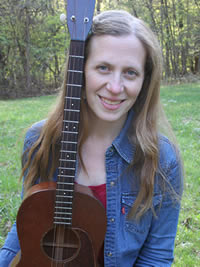 Elizabeth Mitchell has been recording and performing music for children and families since 1998. At the suggestion of friend Dan Zanes, Elizabeth was the first new children's music artist signed to Smithsonian Folkways in the 21st century. Her newest release, "Sunny Day" features collaborations with Levon and Amy Helm, Dan Zanes, Jon Langford of the Mekons, and the Children of Agape Choir from South Africa. Elizabeth has also recently collaborated with Ziggy Marley, singing the duet "Wings of an Eagle" with him on Ziggy's 2009 release "Family Time." Elizabeth and family live in the Catskill Mountains of upstate New York. She records and performs with her husband Daniel Littleton, their nine year old daughter Storey Littleton, violinist Jean Cook and a host of talented musical friends and neighbors. An Elizabeth Mitchell performance is a warm, family style hootenanny that engages everyone, parent and kids alike , in a fun, all ages interactive event that is part celebration, part learning adventure! 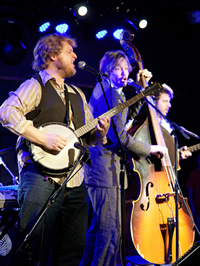 Founded by Brooklyn-based teacher/songwriter Lloyd Miller in 2003, the Deedle Deedle Dees use rock-n-roll, country, hip hop, New Orleans piano music, punk, and folk to teach kids about American history, the natural world, social action, and other cool stuff that they might never have thought about before. Revolutionaries and unsung heroes are our favorite topics: Satchel Paige, Nellie Bly, Henry Box Brown, César Chávez, and Eleanor Roosevelt are just a few of the fascinating characters who live in our songs. Kids are never expected to sit and listen to the Deedle Deedle Dees at our concerts: they spread their arms and fly around like Amelia Earhart, bounce and tumble in a box like Henry Brown, throw the "hesitation pitch" like Satchel Paige, and march to freedom like Harriet Tubman. The Dees have brought their unique rock-n-roll classroom to many big-time venues like Symphony Space and the Knitting Factory in New York, but also to public schools, libraries, parks, zoos, and other family venues across the country.