Enjoy previews of select, upcoming albums, in their entirety on FIRST LISTEN.

On 'Gold & Grey,' Baroness Becomes A Universe Unto Itself 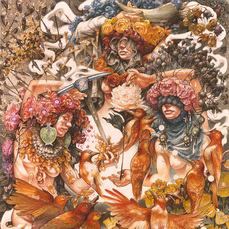 Note: NPR's First Listen audio comes down after the album is released. However, you can still listen with the Spotify and Apple playlists at the bottom of the page.

After 16 years of hard rock evolution, Baroness, now more than ever, sounds fascinated with the possibility of rock and roll's future. Gold & Grey is the final entry in the band's long-running series of color-coded releases which began with The Red Album in 2007. It would have been poetic to bring the band's sound back full-circle on this release, and in some ways the group does just that. But in the course of the record's expansive 17 songs, the band members explore a palette of emotions and sonic ideas as varied as the numerous shades a painter can create with just two component colors — singer and guitarist John Baizley should know, he's an accomplished painter by trade.
In its scope, Gold & Grey feels like a callback to the heyday of the rock album as art object — that period in the late '70s when a radio-friendly rock band like Led Zeppelin released the sprawling Physical Graffiti, and their even more heady compatriots in Yes released the monolithic Tales from Topographic Oceans.
It's not the first time Baizley and company have cast their creative net as wide as it can go — in 2012, Baroness released a double album, Yellow and Green. However, the band recorded that album as a three-piece with Baizley handling all the bass duties, a process which he admits constrained him.
On Gold & Grey, with a newer, bigger backing band — returning bassist Nick Jost and drummer Sebastian Tomson are joined by new guitarist and backup vocalist Gina Gleason this time around — and a highly improvisational writing approach, Baizley had the chance to revisit the possibilities of Yellow and Green while indulging his every eccentricity. Acoustic guitars anchor the plaintive "Tourniquet," while more distorted riffs on "Throw Me an Anchor" and "Broken Halo" remind listeners that Baroness was once a heavy metal band — and on "Seasons," drummer Sebastian Thomson tastefully employs some high-speed blast beats typical of the most extreme metal bands. Interludes like "Blankets of Ash" and "Crooked Mile" evoke the stateliness of prog rock with string sections, synthesizers. In nearly every song Baizley and Gleason evoke the two part vocal harmonies of Alice in Chains — Baizley tells NPR that the band employed "an almost irresponsible amount of harmony."
"I made sure everyone understood that we didn't have to worry about things like brevity, or efficiency," Baizley says about the band's mostly off-the-cuff recording sessions with Dave Fridmann. "What we needed to do was expand."
Expand Baroness has. Like an aging star swallowing the planets which once burst from its surface, Baroness has redigested every sound of the band's career thus far and synthesized it into something greater. Gold & Grey is the sound of a band becoming a universe unto itself.
Copyright 2020 NPR. To see more, visit https://www.npr.org.