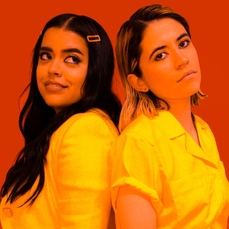 For June 2019's Heavy Rotation, take a listen to NPR member stations' most loved songs of this month. You'll find upbeat pop selections from REYNA and Kyle Craft's innovative take on the classic rock sound. Heavy Rotation is the perfect way to immerse yourself in different music scenes around the country, while discovering some hidden gems to add to your music library.
All songs from this month's Heavy Rotation are available to stream on the Heavy Rotation Spotify playlist at the bottom of this page. — Maya Eaglin

"Dandelion Crown" is the crunchy, earthen, fully photosynthesized sunbeam required in our playlist. The warmth from the distorted-to-hell guitar sounds unlike anything else I've heard this year and is the strongest melody yet released by this eccentric one-man-band. Remarkably, Matt Lorenz continues to exponentially expand his songwriting while keeping very specific instrumentation: A guitar, a bag of bones, a suitcase and some other knickknacks. It's extra satisfying to know that said guitar is the only one The Suitcase Junket has ever played, as he laid out in his visit to WERS. — Phil Jones, WERS

When M.C. Taylor creates, he does so with purpose. As Hiss Golden Messenger, the North Carolina musician has been navigating life's bigger questions for a decade. "I Need a Teacher" — the first single from Taylor's forthcoming album, Terms of Surrender — is no exception.
"It started out as a search for something impossible to find: Forever guidance in an ever-changing universe," Taylor wrote on social media. The song's accompanying video features teachers and students who recently protested funding cuts to education in his home state. That's not to say the track is a downer. It's a buoyant and uplifting showcase of roots rock, bearing out its key lyric by finding the "beauty in the broken American moment." — Desire Moses, WNRN

Johnny Polygon had a bad, lingering cough last summer. He was constantly out of breath and couldn't sleep. A hospital trip revealed it was more than a cough. It turned out to be an undiagnosed heart condition. The doctor told the then-34-year-old that if he hadn't come in that day, he'd be dead.
After getting the right medical care, he wasted no time writing and producing beats for "Bad Habits" right there in his hospital room. The brutally honest and insanely catchy song is a reflection of everything that led him to that point — drinking and smoking, letting down friends, and empty promises about lifestyle changes.
But, it's not a downer. Johnny calls it his Rocky song. Its synth-pop and Vaporwave sounds are what Johnny says he heard in his head as he imagined driving out of the hospital with the new lease on life. —Ryan LaCroix, KOSU

Although never one to shy away from brash and bold arrangements, Kyle Craft has opted for a more subdued sound on "Broken Mirror Pose," the latest single from his forthcoming release, Showboat Honey.
On the track, his typically wailing voice is stunted by almost spoken word verses that ride along with a slow-rolling piano progression. It's a suspense-building element that pays off when the song eventually crashes into a wave of horns, electric guitars and sheer swagger. — Jerad Walker, OPB

The undisputed queen of the California chill beach culture takes on another beach icon. Lana Del Rey's new cover of Sublime's "Doin' Time" immediately sounds like a summer song lyrically (of course) and stylistically. Her version of this Bradley Nowell-bastardized version of a Gershwin classic works immediately, with or without herbal accompaniment. Her strict word-by-word adherence to Nowell's lyrics is interesting and, ultimately, right way to diffuse a few of the more questionable lines. Overall, though, it's a vibe and rarely has the sound of a tune matched the style of the vocalist covering it better than this one. This is a must have for your summer mixtape this and every summer. — Dan Reed, WXPN

Twenty two-year-old Omar Apollo is a young Mexican kid straight out of Hobart, Indiana with a lot of soul and a lot of ganas; that's a desire to do big things. that's apparent with the release of his second EP in two years, Friends. It's a funky, fresh collection of straight jams.
On his psychedelic funk track "Ashamed" Omar takes us through the motions of wanting (or not wanting) someone's love by placing us on a sonic roller coaster of influences — Prince, Tame Impala, Frank Ocean. By the end of the ride, you'll want to give it another listen and add it to your Summer vibes playlist on heavy rotation. — Silvia Rivera, Vocalo

REYNA, "The Way I Loved You"

Ride that roséwave right from the Carly Rae Jepsen to REYNA this summer. It is so primed for roséwave that it even has bubbles in it.
"The Way I Love You" has a big pop hook sang with just a tinge of regret that has the mood of Lorde with the attitude of Ariana Grande. For years in Milwaukee, sisters Vic and Gabby Banuelos have been shaping their pop sound and have created this bit of pop perfection. So pop a cork, pour a glass and cheers to looking back but dancing whatever's next. — Justin Barney, Radio Milwaukee

Alcoholism is not a topic for the faint of heart. That's why The Lumineers latest single, "Gloria" may be one of the most courageous songs to come out in some time. "Gloria" captures the spirit of previous Lumineers releases with a rollicking piano line and a chorus guaranteed to have audiences singing along. Beneath the surface there is a message. Alcoholism is a disease that can kill as we are reminded when Wesley Schultz sings, "There's easier ways to die."
Hats off to The Lumineers for creating such a memorable piece of art without being overly preachy and prompting us to remember that sometimes "Enough is enough." — Benji McPhail, Colorado Sound

The Raconteurs, "Help Me Stranger"

The Raconteurs' "Help Me Stranger" is one of the insta-classics on the new album Help Us Stranger, which follows the template of the band's first two releases that pluralize a lyric to create an album title. Jack White and Brendan Benson rediscovering the alchemy of their songwriting and vocal harmonizing is what fans of the band have waited a decade for.
When I complimented White on the song's clattering percussion, lo-fi country intro and various low-in-the-mix touches that add to the tune's character, he told me it was the band's favorite song that they've produced. (All four members share producers' credits on the album.) " — Eric Holland, WFUV

Tyler Ramsey, "A Dream Of Home"

Burned out by a decade of touring with Band of Horses, guitarist Tyler Ramsey left the group to create a more stable life. He, his wife, and newborn daughter, retreated to an isolated mountain farm where Ramsey began creating songs that reflect his connection to nature and family. "A Dream of Home" captures the repetitive, exhaustive pattern of life and work on the road, and the loneliness of missing seasons away from loved ones. Ramsey's songs reflect a sense of place and, as a new dad, a renewed sense of purpose.
Spacious arrangements elicit the feel of starry nights, golden fields, and woody trails. Shimmering guitars and drum beats feel like an invigorated pulse, and the sprawling six-minute length suggests a more tempered pace to life. --Rosemary Welsch, WYEP
Copyright 2020 NPR. To see more, visit https://www.npr.org.