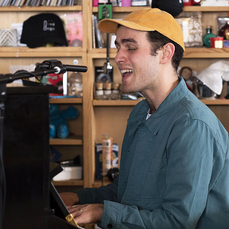 Sometimes, things don't go smoothly at the Tiny Desk. After traveling all night, the soulful R&B artist Jordan Rakei and his band pulled up to NPR in their tour bus at the crack of dawn, only to find the Fender Rhodes we'd rented for him didn't have the right action. But after quickly ordering a replacement (that arrived moments before the Tiny Desk performance started), Rakei and his band locked-in and played a phenomenal set.
The band opened with "Say Something," from the group's 2019 album, Origin. It's a song that encourages people to take action and speak up for themselves. They followed with "Mind's Eye," a commentary on technology that questions whether advancements are always a good idea. After playing "Talk To Me," from the group's 2016 debut album, Cloak, they returned to their most recent release to close with "Speak," a reflective song with a beautiful solo piano accompaniment. Inspired by the TV show and book The Handmaid's Tale, it imagines a world where nuclear war has left half the women infertile, as technology runs amok.
Despite the sometimes dystopian themes in his music, Rakei's sound is easygoing and colorful. While steady grooves connect his singular blend of jazz and R&B, his tight chord voicings, compelling rhythms and mesmerizing vocals make for a wonderful performance.