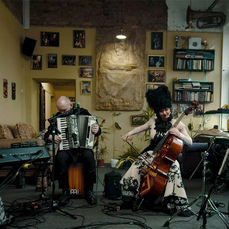 This show marks DakhaBrakha's return to globalFEST and Tiny Desk. The Ukrainian band's first globalFEST performance was in 2014, and their 2015 Tiny Desk concert remains a favorite. We've had them in our spaces, so it's a real treat to see them in theirs, the Dakh Theater in Kiev. Coming together, their performance maintains the energy and joy that define their music, bouncing off each other musically and emotionally. DakhaBrakha aims to keep Ukraine's musical and storytelling tradition alive by making it more accessible to a younger, international audience, a kind of self-proclaimed "ethno-chaos." They craft stunning sonic worlds for traditional songs, reinventing their heritage with a keen ear for contemporary resonances. This performance took place during the opening night of our 2021 festival. --globalFEST
SET LIST