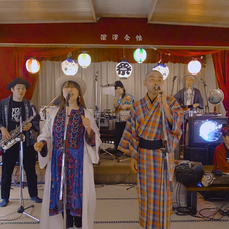 Min'yō folk music was originally sung by Japanese fishermen, coal miners and sumo wrestlers hundreds of years ago, and the Minyo Crusaders are on a mission to make these songs relevant to an international audience. For their performance, the Crusaders found a unique take for their desk: a "kotatsu," which is a heated Japanese table traditionally used for gathering in the winter months. This concert took place during the second night of our 2021 festival. --globalFEST