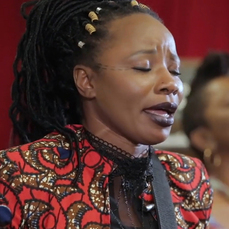 From a studio space in Brooklyn, Guinean native Natu Camara mixes West African soul, rock and pop music. As a builder of inter-cultural bridges, Camara uses her songs to bring people together, weaving a tapestry of musical stories and visions of her beloved home. This performance took place during the second night of our 2021 festival. --globalFEST