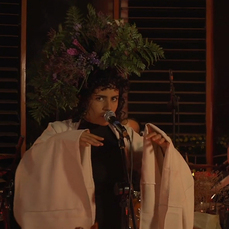 From the candle-lit home of their lead singer, Hit La Rosa comes in hot and doesn't stop until the final measure. The band explores the many facets of Peruvian cumbia music, infusing it with pop music, folklore, jazz and dancehall to produce its distinctive grooves and hooks. The band's precise-yet-dreamlike music and punk sensibility all come together to make music that explores life's shadowy sides. Despite living through a political crisis in Peru, the band brings a message of hope and joy in the midst of struggle and upheaval. This performance took place during the second night of our 2021 festival. --globalFEST