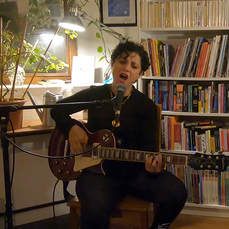 Tunisia-born singer Emel first performed at globalFEST in 2015, the same year she performed her song of Tunisian Revolution, "Kelmti Horra," at the Nobel Peace Prize Concert. Emel was hailed by NPR as a "21st century catalyst for change." She created her latest album, The Tunis Diaries, equipped with only a laptop, tape recorder and a crowdsourced guitar after she was unexpectedly quarantined in her childhood home in Tunis last spring. This performance capped the second night of our 2021 festival. --globalFEST