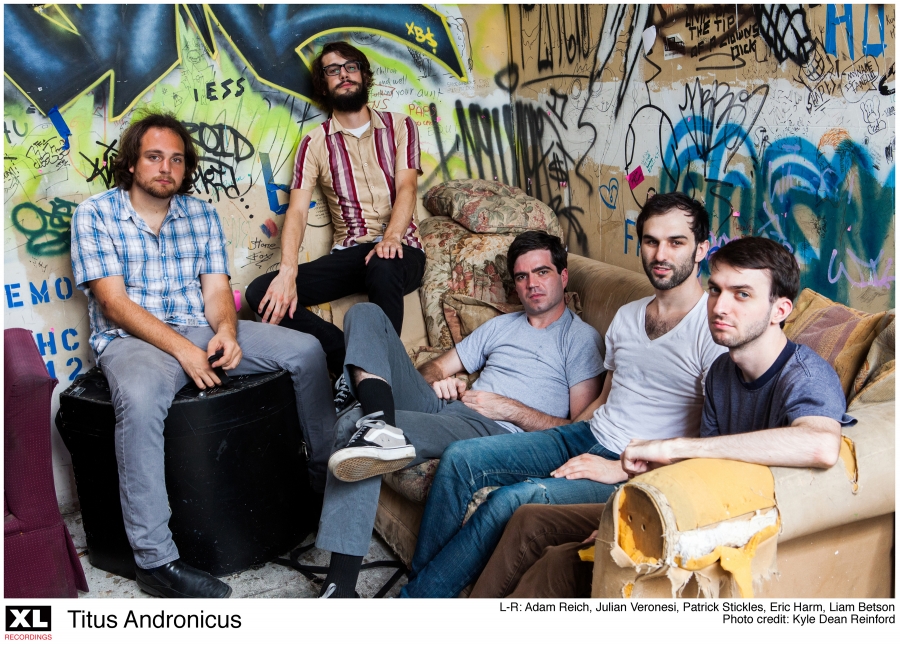 Titus Andronicus
Photo Credit: courtesy of artist
Formed in 2005, Titus Andronicus is a New Jersey based punk/indie rock band that recently released its well-acclaimed forth studio album Local Business (XL Recordings). Inspired by Shakespeare’s very first tragedy, Titus Andronicus, the band collectively decided to identify itself with this renowned literary classic. Though the band has experienced some instability with its members in the past, it currently consists of Patrick Stickles, Eric Harm, Julian Veronesi, Liam Betson, and Adam Reich.
Following the success of the band’s third album, The Monitor, which debuted at #7 on the Billboard Heatseekers chart and landed a coveted spot to perform live on Late Night with Jimmy Fallon, Titus Andronicus took a rather interesting approach crafting its latest album.

Listen to the band’s interview and performance on World Café this Thursday where Patrick, the frontman, will discuss the inspiring elements that led to the production of Local Business. Firmly believing in the preservation of local businesses, the band has embarked on a North American tour celebrating independent institutions and wittily promoting Local Business. With a Twitter campaign stressing for users to increase awareness of local businesses, it is very clear that this band is socially conscious. During the performance, be sure to listen for the band’s latest single “In a Big City.” A single that is amusing yet real, an interesting fact about the accompanying video is that Patrick created it only using iMovie. Talented? Yes!

Setlist:
ECCE HOMO/
STILL LIFE WITH HOT DEUCE ON SILVER PLATTER
UPON VIEWING OREGON'S LANDSCAPE WITH THE FLOOD OF DETRITUS
IN A BIG CITY
Website Facebook
Tagged under

More in this category: « Felix Contreras Father John Misty »
back to top