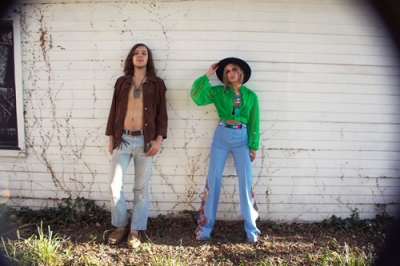 April 15, 2013 - It’s not like Escondido members Jessica Maros and Tyler James don’t have enough going on already. She is a thriving fashion designer in Nashville, dressing Lady Antebellum and others.

Tyler has been a member of Edward Sharpe and The Magnetic Zeros and recently had one of his songs placed on Nashville the TV show. But the two met in 2011 and found musical compatibility in their mutual love of Ennio Morricone and his Spaghetti Western soundtracks. Fans say their music together sounds like “desert sex.” They recorded their debut The Ghost of Escondido live in one day . We will play some for you.

More in this category: « Luella and The Sun Bleached »
back to top