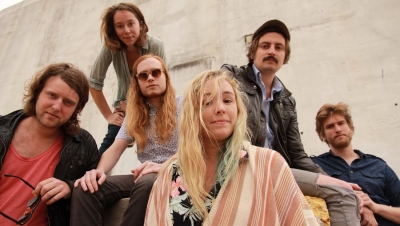 Photo credit: Todd V. Wolfson
Wild Child October 28, 2013 - Our World Cafe: Next artist for today is Wild Child from Austin, Texas.
Led by Kelsey Wilson and Alexander Beggins, the band formed in 2009 and are now releasing their second album called "The Runaround." This past March they won both Best Folk Act and Best Indie Act at The Austin Music Awards, but with their new album produced by Ben Kweller they seem to be moving away from folk to a more all-encompassing sound. These very catchy songs are available on our World Cafe: Next podcast.

More in this category: « American Mars Jay Arner »
back to top