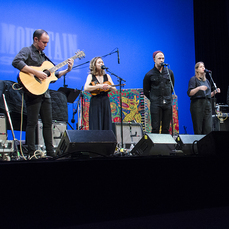 The Brooklyn, N.Y.-based indie pop orchestra San Fermin made its second appearance on Mountain Stage in Charleston, W.Va., on Nov. 24, 2019.
The stop came on the last night of an extensive tour promoting the first of two thematically-linked albums, The Cormorant I and The Cormorant II, with the latter set to come out in 2020. "This is the 40th and last day of our tour and it is a truly lovely way to close out our travels for now," vocalist Claire Wellin told the audience.
Ellis Ludwig-Leone, the band's Yale-educated and classically-trained composer and keyboardist, wrote the albums while in Iceland. According to host Larry Groce, the new work feels like a winter album, and these performances warmly reflect the sentiment. As the seven-piece band took to the musical canvas for five endearingly dark songs, the music peaks and crashes like the band is collectively building an aural oil painting of life's rocks, islands and birds.
"Out adrift on a sea of / Something just underneath love / We were young, we were tender and tended to / Will you tend to me now?" Allen Tate sing-songs in his talkative style on the haunting ballad, "Summer by the Void." It sets the tone of the achingly beautiful and reflective nature of San Fermin's work on The Cormorant I.
The ethereal vocals of Claire Wellin and Karlie Bruce intertwine on "The Hunger," while Tate's soft baritone and the horns of Stephen Chen and John Branson ripple underneath. On the next song, Tate's warm and rich baritone is back, walking us through the night life of "The Living," while a baritone saxophone solo from Chen matches Tate's textured voice. On "Saints," Claire and Karlie's vocals wax together intensely with Ludwig-Leone's piano as they look back on time lost and losing track of friends.
The vision of The Cormorant I seems fully realized in the set closer, "The Myth." Leone's piano is mournfully alive, matching Wellin and Bruce singing angelically of nature's power to inspire reflection: "And birds of brilliant white fly low to talk to me / Remind me of the child who I used to be / Running on tiptoe / I would sing for my life / I would sing for my life / If I knew the words."
With a deep sweeping exhale of respect for the band, Groce, finds closing words fitting for such a performance. "See what wonderful textures, what wonderful harmonies and arrangements that they have," Groce told the audience. "It is really quite beautiful, and it is great to have them back with us."