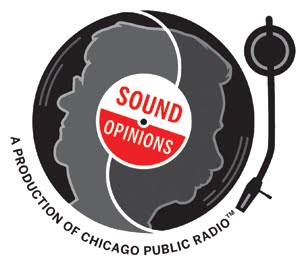 Tuesdays at 10pm
Every Tuesday at 10pm, Sound Opinions fires up smart and spirited discussions about a wide range of popular music, from indie rock to classic rock, hip hop to R&B, and every genre under the sun.

Take two nationally respected rock critics, the latest music news, personal commentary, and exclusive interviews and performances, add a huge pile of records old and new, and the result is Sound Opinions — the world's only rock and roll talk show.

Based in Chicago, Sound Opinions is hosted by Jim DeRogatis and Greg Kot, two of the finest and best-recognized pop music writers in the nation. For over a decade they were dedicated competitors at Chicago’s two daily newspapers—Jim at the Chicago Sun-Times and Greg at the Chicago Tribune. Today, Jim writes about music for Vocalo.org and teaches criticism at Columbia College in Chicago, the largest and most diverse private arts and media college in the country.

Every week, Sound Opinions fires up smart and spirited discussions about a wide range of popular music, from indie rock to classic rock, hip hop to R&B, and every genre under the sun.

Sound Opinions' consistently informed, engaging, and controversial dialogue makes it a unique and essential source for the top stories, albums, and trends in music. This is cutting-edge criticism and journalism presented in the great tradition of Siskel and Ebert. The discussion is as indispensible to the hardcore music fan as it is to the casual music fan who feels out of touch.

Sound Opinions is a direct result of the experience and credibility of its creators. Greg and Jim write for some of the nation's most prestigious rock magazines, including Rolling tone, Spin, and Vibe. Both are critically acclaimed authors - Greg wrote Ripped: How the Wired Generation Revolutionized Music

and Wilco: Learning How to Die

; Greg authored a number of books, including The Velvet Underground: An Illustrated History of a Walk on the Wild Side

Before coming to WBEZ Chicago in December 2005, Sound Opinions aired for seven successful years on one of the Midwest's most powerful rock radio stations, Chicago's WXRT. The show has built a thriving and loyal community of inquisitive and engaged fans hungry for smart conversation and new sounds.